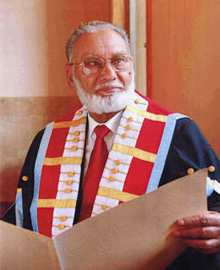 Islam and Scotland have been connected as far back as the early middle ages. In the 8th and 9th centuries pilgrims travelled to the Holy land and Scottish traders visited the Muslim countries of the Iberian Peninsula and North Africa. In the British Museum is a gold coin issued around 780 by Offa, the eighth-century King of Mercia, with an Islamic inscription around the rim, minted probably to trade with the expanding Islamic empire in Spain. References to Britain are found in early Islamic geographical literature, such as the 9th century work of Ahmad ibn Rustah (d. 910) which describes the islands of "Bratiniya". 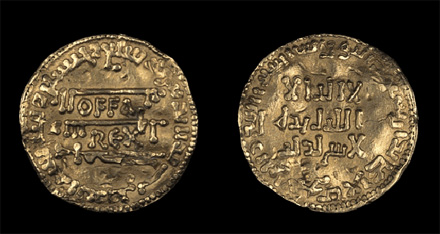 [The discovery of silver coins from a hoard at Talnotrie, Glen of the Bar, Kirkcudbrigthshire, bearing the name of the Abbasid Caliph al-Mutawakkal ala Allah (r. 847-862), confirm the connection between Scotland and the Muslim world in the ninth century. Also, over a dozen coins from the eastern Islamic world were found in the hoards discovered at Storr Rock, in Skye and Skail, Orkney. The discovery, some years ago, of this gold quality coin bearing the inscription Offa Rex (King Offa of Mercia) on one side and La ilaha ill Allah in Arabic is a conundrum.]

The geographer and mapmaker Muhammad al-Idrisi in the 12th century, depicted Scotland on one of his maps which helped to inspire Christopher Columbus and Vasco Da Gama. Apparently his travels took him to many parts of Europe including Jórvík or York, in England. Scottish knights, some of them Knights Templar, joined crusades to Jerusalem, among them Alan FitzWalter, High Steward of Scotland, who joined Richard the Lionheart on the Third Crusade. Robert the Bruce, King of Scotland had directed that his heart should be taken and buried in the Holy Land. It only got as far as Muslim Spain, from where it was eventually retrieved and returned to Scotland. 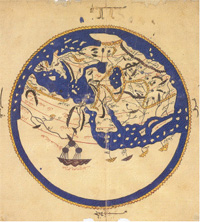 [Muslim map of the known world in the tenth century which shows that the world is considered to be round, and that islands on the north west edge of Europe (Ireland, England, Scotland) were known about – as early as the ninth century. Scotland is mentioned in the works of Muslim geographers]

Contacts with the Muslim world continued over the centuries and developed markedly during the British Empire. Scots travelled as merchants, military men and civil servants to India, Malaya, Nigeria and many other countries with Muslim populations. The first Muslims to come to Scotland were seamen and servants brought over from India during the 18th century by the Scottish merchant ships and the retiring Scottish officers of the East India Company. The Indian seamen who were mainly Muslims were recruited in Indian seaports by the Scottish merchant ships. However, they did not all settle in Scotland, the servants returning to India and the seamen staying only as long as their ships were in port. However, from the late 19th century, this pattern began to change and some of the seamen and servants began to stay in Scotland to find work. As jobs were hard to find, some of them became peddlars - selling drapery goods door to door - in the rural areas around Glasgow.

As they found some success in this trade, they encouraged their relatives and friends to join them so they could also better their lives by working in Scotland. With their families here, the steady process of their settlement in Scotland began. By the 1970s, there were over 12,000 Muslims in Scotland, diversified into many other trades and professions.

There are now over 60,000 Muslims living in Scotland and Islam is thus the second largest religion in this country. There are about 60 Mosques in Scotland and the new purpose-built beautiful Mosques.

Muslims are living in every Scottish city and town and participating in every walk of Scottish life. Muslim doctors look after the health of Scottish people of remote islands, rural villages and urban towns. Scots enjoy Muslim restaurants from the remote Hebridean Islands to the Scottish Borders, with their menus of Chicken Tikka and Lamb Bhoona.

Muslim Scottish businessmen and entrepreneurs have made important contributions to the economy and participation in government is steadily increasing with 12 Muslim local councillors, two Muslim MSPs and one Member of Parliament serving the Scottish people in their respective constituencies. Scottish Muslims have indeed a long history to celebrate, with origins dating back far beyond the East India Company and the British Empire, and there are two powerful symbols to recognize this – the gold coin of King Offa of the 8th century and the new Muslim tartan bringing the two civilization together in the 21st century.

Bashir Maan CBE, a Pakistani-Scottish politician, businessman, judge, community worker and writer. He is author of The New Scots (1992) and The Thistle and the Crescent (2008)

Anas Sarwar MP, a British Labour Party politician and is deputy leader of the Scottish Labour Party. He has been the Member of Parliament for Glasgow Central since 6 May 2010, succeeding his father Mohammad Sarwar.

Abdalqadir as-Sufi (born Ian Dallas in Ayr,Scotland), is a Shaykh of Tarbiyah (Instruction), leader of the Darqawi-Shadhili-Qadiri Tariqa, founder of the Murabitun World Movement and author of numerous books on Islam, Sufism (Tasawwuf) and political theory.

Osama Saeed chief executive of the Scottish-Islamic Foundation and one of Scotland's foremost peace activists and human rights campaigners. Osama has been listed as one of Scotland's Top 100 thinkers and opinion formers by the Scotsman newspaper, one of the country's "Brightest and Best" by the Sunday Herald, and has been described as Scotland's most influential Muslim by the Sunday Times.

Bashir Ahmad - first Asian Member of the Scottish Parliament (2007–2009) Ahmed was a prominent and well respected figure in Parliament and in his community. He was revered for his character, his grace, kindness and decency and his active compassion for a better, more inclusive society.

Mona Siddiqui is a British Muslim academic, currently University of Glasgow's Professor of Islamic Studies and Public Understanding, as well a regular contributor to BBC Radio 4, The Times, Scotsman, The Guardian, The Herald